About the Pangolin Conservation Project

The Pangolin Conservation Project was initiated by Dr. Priyan Perera and the Biodiversity and Sustainability Research Group of the Departme

nt of Forestry and Environmental Science, University of Sri Jayewardenepura in 2014 with the initial funding of Biodiversity Secretariat, Sri Lanka.

The focus of the project has primarily been to protect pangolins from poaching and collect data on the population, behaviour and ecology of Indian pangolins in Yagirala Forest Reserve.

The Pangolin Conservation Project operates based on the Yagirala Conservation Education Center of the Department of Forestry and Environmental Science, University of Sri Jayewardenepura.

Taking up the challenge of Pangolin Conservation in Yagirala

Yagirala Forest Reserve (Kalutara District) over the years has been a favorable habitat for M. crassicaudata with rather regular observations of

direct and indirect evidences for the presence of this species. However, at present, the species has become very much rare most likely due to excessive hunting. A recent focal interview survey of local community and field observational records at Ygirala Field Research Center of the Department of Forestry and Environmental Science, University of Sri Jayewardenepura confirm this observation. Hence, the proposed research attempts to estimate the distribution and abundance of M. crassicaudata in a tropical lowland forest and the research will generate invaluable information on abundance, ecology and behaviour of M. crassicaudata, which are vital in conservation planning for this species in Sri Lanka.

One of the major impediments to studying wild pangolins has been the difficulty in locating them. The potentia 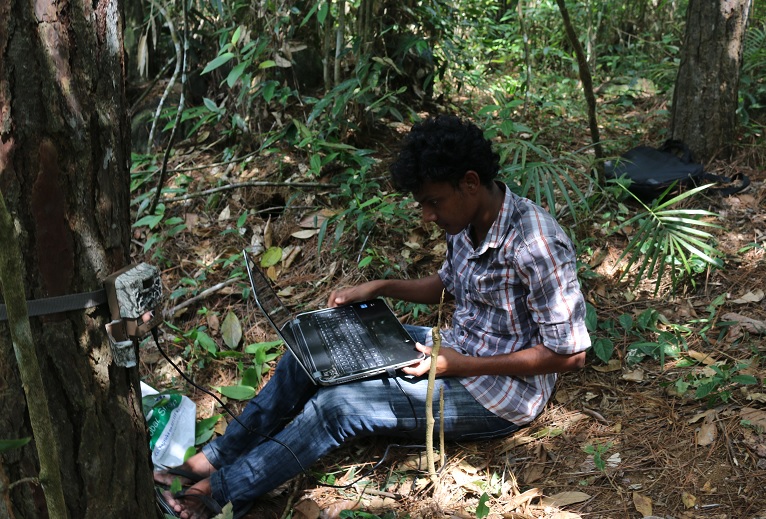 l for radio-tracking wild-caught pangolins to monitor home-range size and habitat utilization has been demonstrated elsewhere, but these studies have been conducted in areas with high pangolin densities. Standard ecological monitoring techniques alone may not be adequate in surveying pangolin populations. This research employs a combination of methods i.e. camera trapping and information from locals to estimate the distribution and numbers of pangolins in Yagirala Forest Reserve (FR) area, and employs camera traps and GPS collars to understand behavior and ecology of the species.

Significance of the study...

The most recent IUCN Red List of Threatened Species status assessments listed Manis crassicaudata as Endangered. Indian Pangolins worldwide are subject to a number of threats including hunting for illicit trade, and killing for their meat, despite domestic and international legal prohibitions. There are no population estimates for any species of pangolin anywhere (I

UCN 2015) and little is known about pangolin ecology and biology or their conservation needs, making it difficult to determine the severity of these threats to pangolin populations.